Due to its peninsula location, Rochford is an area that has a relatively constrained and varied transport network for walking, cycling, public transport and private vehicles. 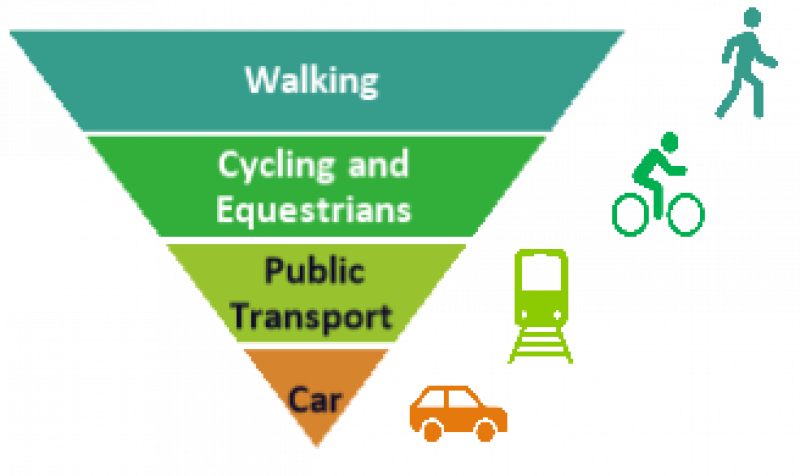 Whilst many residents are dependent on use of private cars, it is important that we plan for a District that makes best use of more sustainable and active forms of movement. This is important for a number of reasons, including:

National planning policy states that transport issues should be considered from the earliest stages of plan-making, so that: 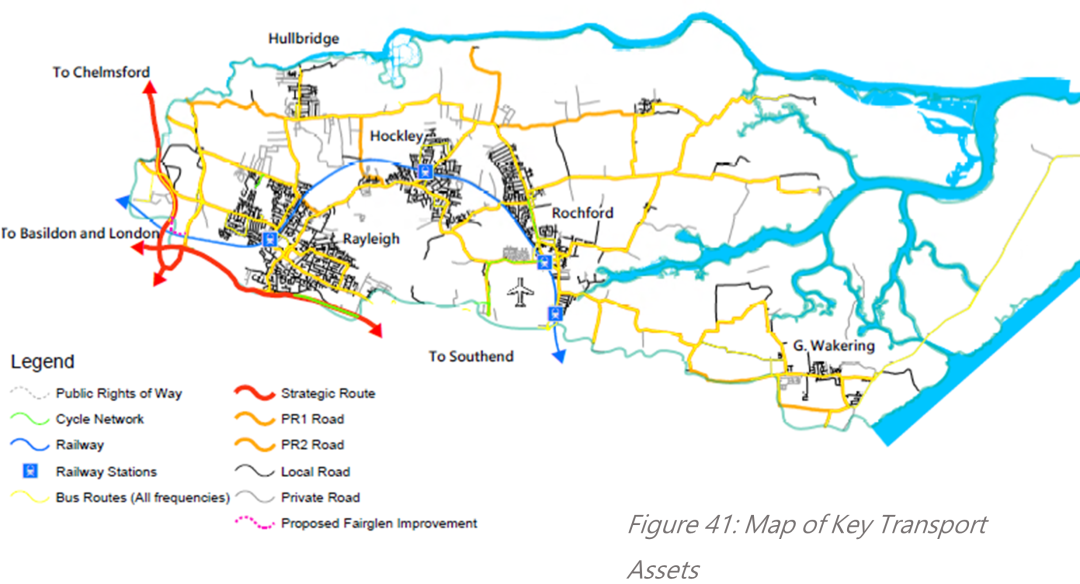 The District has a relatively expansive public rights of way network both within settlements and in the open countryside. However our footpaths and bridleways are of varying quality and often do not reach the places walkers, cyclist and equestrian users want to go. We also recognise that our cycling network is particularly limited and requires expansion to better reflect the 'desire lines' of our residents and to become a realistic alternative to the private car for more people. The Rochford Cycling Action Plan identifies a number of potential costed routes, primarily to link Rochford, Rayleigh and Hockley. One way we help to deliver these, and other, routes is by preparing a Local Walking and Cycling Infrastructure Plan (LCWIP) alongside the plan to identify and deliver specific improvements to these networks.

The District is connected to London and Southend by the Southend Victoria branch of the Great Eastern Mainline, with stations in Rayleigh, Hockley, Rochford and at Southend Airport. This rail connection forms an important commuting route for local residents and key asset for the local economy, however it struggles with capacity at key times. It is important through the plan that we consider ways of improving capacity both on trains and at stations, taking on board the findings of the Great Eastern Mainline Study. However we recognise it is also important that this is considered against any longer-term economic trend towards home working, which may have been accelerated as a result of the COVID-19 pandemic.

Bus connectivity is relatively more varied with a number of routes serving the main towns of Rochford, Rayleigh and Hockley, with relatively more infrequent services in Hullbridge and Great Wakering. These bus services primarily provide inter-urban services to other towns and villages in the District, as well as to towns in neighbouring areas such as Basildon, Chelmsford, Castle Point, Wickford and Southend-on-Sea. There is a role for the plan in improving the frequency and reliability of existing bus routes, by locating development in areas which could benefit from these improvements, as well as ensuring developments have good access to viable existing and proposed routes to make sure these are a realistic choice for residents.

The District benefits from two main strategic routes, the A127 and the A130, which both act as economic corridors and provide connectivity beyond our borders to Southend, Basildon, London and Chelmsford via the A12, A13 and M25. These are supported by a network of important inter-urban routes, including the A129, A1015, A1245, B1013, Rawreth Lane, Ashingdon Road and Lower Road, which together connect our towns and villages to one another. Rochford's road network is known to have congestion issues primarily focussed along the main routes detailed above and at key junctions along those routes. Many of the District's congestion issues arise from the relatively few alternatives that residents have, particularly to make north-south journeys. In some cases, towns and villages are only connected by one viable route which often becomes congested at key times.

It is recognised from feedback from the Issues and Options consultation that many residents experience major congestion on our road network and feel that the road network has not kept up with increased demand in recent years. Whilst new developments can only mitigate their own impact, and not existing congestion, it is clear that a more ambitious approach is required to connectivity if we are to keep growing. We must work with Government, Highways England, Essex County Council and neighbouring local authorities to make sure we can attract investment to deliver real change, including a potential South Essex Rapid Transit system, new link roads and junction improvements. Plans already exist for improvements to the Fairglen interchange to improve journey time reliability when interchanging between the A127, A1245 and A130, whilst an A127 taskforce has been established to explore long-term options for improving journey time reliability on this key corridor. Whilst road and junction improvements will be an important part of the plan, a strategy based solely around the private car is likely to simply reinforce current trends, and we must put in place complementary measures that deliver a modal shift in both existing and new communities towards more sustainable options wherever possible.

OPTIONS - Non-exclusive options for addressing transport and connectivity through the plan are to:

(57) Q51. With reference to the options above, or your own options, how do you feel we can best address our transport and connectivity needs through the plan? [Please state reasoning]
(85) Q52. Are there areas where improvements to transport connections are needed? What could be done to help improve connectivity in these areas?
(31) Q53. With reference to your preferred Strategy Option, are there opportunities for growth to deliver new transport connections, such as link roads or rapid transit? What routes and modes should these take? [walking, cycling, rail, bus, road etc.]