Purpose of a Playing Pitch Strategy

1.1 The aim of this Playing Pitch Strategy, in light of the revised Sport England Methodology, is to provide a concise and accurate update of the previous Strategy, completed in 2007, which reflects the level of supply and demand within the District. This Strategy will function as a Supplementary Planning Document for the Local Development Framework, providing guidance for playing pitch provision and improvement in the area.

1.2 Under Government guidance, it is recommended that such assessments are thoroughly conducted by Local Authorities in order to effectively provide for the needs of the community through strategic planning policies.

1.3 The necessary increase in the provision of new households in the District up to 2026 and beyond, to provide for the already growing population, will intensify the pressures on land. Thus this assessment will help ensure informed decisions are made on the future supply and distribution of playing pitches.

1.4 A ‘playing pitch’ has been defined within The Town and Country Planning Order 19961 as:

A delineated area which, together with any run off area, is of 0.4 hectares or more, and which is used for association football, American football, rugby, cricket, hockey, lacrosse, rounders, baseball, softball, Australian football, Gaelic football, shinty, hurling, polo or cycle polo.

1.5 The Department of Children, Schools and Families, however, in their most recent publication (The Protection of School Playing Fields and Land for City Academies, Ref: DfE-1017-2004, Annex B, paragraph 13) regarding the provision and protection of playing pitches, define a pitch used for sporting activities as:

Open grassed land that is capable of forming at least a small pitch, which is equal to, or larger than, The Football Association's recommended area for games played by under-10s, that is 2,000m2. It should also have a configuration and topography making it suitable for a sports pitch, whether it is laid out or not, or

Synthetic or artificial playing surface, or dedicated hard games court of more than 2,000m2 that is set out for team games.

1.6 In this assessment, with regard to the guidance examined, the definition used to describe a ‘playing pitch’ will be:

A defined area of free draining open grassland or an artificial surface, which is generally greater than 0.2 hectares and enables the execution of one or more team games.

1.7 Furthermore a ‘playing field’ refers to the whole of a site which encompasses at least one playing pitch (Circular 09/98: Town and Country Planning (playing fields) (England) Direction 1998).

1.8 It is necessary to analyse the current situation of Rochford District and identify the prominent issues which will have an impact on playing pitches.

1.9 At present, the population within the District is estimated to have exceeded 83,0002, the majority of which are situated around the main urban centres of Rayleigh, Hockley and Rochford. The needs of the projected population, which is expected to reach around 90, 000 by 2029 (see Figure 1.1), is to be met by an increase in housing development within the District.

Figure 1.1 – The projected population increase of the Rochford District up to 2029 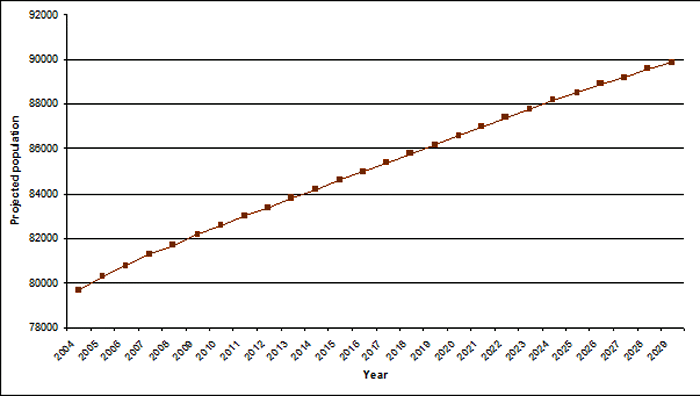 1.10 The District has a demographic age structure which is typical of an ageing population. In the last 30 years, the proportion of the population aged over 65 has increased whilst the proportion aged under 16 has decreased. This is a trend which is expected to continue. In 2009 it was estimated that 19.31% of the population were 65 years or above, which is higher than the regional and national averages. In contrast, 23.45% were below 19 years of age, which is estimated to be below the county, the regional and national averages (Annual Monitoring Report 08/09).

1.11 The demographic trend of the population in the Rochford District is expected to have an impact on the level of demand for future playing pitch provision. Sport England has established that as people get older, the fewer physical activities they pursue3, with the highest participation rates in the 16 to 19 year-old age group.

1.12 The revised East of England plan encourages the re-use of previously developed land in and around urban areas. Therefore the requirement for local authorities to allocate many of the new homes in the next 20 years around existing urban areas is likely to increase the pressure for development on playing fields and other open spaces. National Policy, however, which is discussed in Chapter 2, strongly opposes the loss or redevelopment of playing fields, unless there is a viable argument.

1.13 According to the National Statistics database, 16.4% of households in the Rochford District, do not have access to a private vehicle thus limiting the level of mobility for some of the population. This figure is below the average for the East of England (19.8%) and England as a whole (26.84%), suggesting that some facilities may not be easily accessible to a significant proportion of the population.

1.14 Unemployment in the Rochford District between Jul 2008 and Jun 2009 was found to be around 4.9%, which is below the regional and national averages of 5.9% and 7% respectively. It has been suggested that there may be a correlation between economic activity, and the propensity to participate in sports.

1.15 Findings in the document Activity Profile: Rochford (July 2007) produced by Sport England, suggest that individuals in a high socio-economic group (NS SEC 1-4 as categorised by the National Statistics Socio-economic Classification ) participate in sporting activities more frequently than those in a lower group (NS SEC 5-8). The proportion of individuals who participate in sport once a week was found to be the same for both groups. More individuals in the lower socio-economic group, however, had a higher incidence of non-participation (58.3%) than those in the higher group (44.2%).

1.16 The factors discussed, such as unemployment rates, population mobility and demographic change, in addition to increasing population pressures, will impact on the provision of playing pitches and their use (in reference to the type and frequency of the sports pursued).

1.17 It has been calculated that in 2005/06 only 6.95% of residents in the District lived within 20 minutes4 of three different sports facilities, a figure which has decreased from 20.6% in 2004/05 due to the removal of a prominent leisure facilities (including three grass playing pitches) ‘quality mark’. The current figure is the 4th lowest in the County and below the Essex average.

1.18 Nearly 20% of residents in the District (regardless of socio-economic status) regularly participate in moderate intensity sport and active recreation, three days a week for 30minutes, according to Sport England5. Rochford is in the middle 50% of the eastern region of England.

1.19 The previous Playing Pitch Strategy, carried out in 2002, concluded that there was sufficient playing pitch provision to satisfy the level of demand within the District, although there was a noted variation in the supply of pitches between the sub-areas. Ancillary facilities and the quality of the playing surface were found to be substandard.

1.20 The Strategy also determined that football was the most popular team sport pursued within the Rochford District. The graph (Figure 1.2) below shows that the percentage of youth football teams based in the District was measured below the national trend between 2006 and 2007.

Figure 1.2 – The percentage of youth teams playing in Rochford at each age 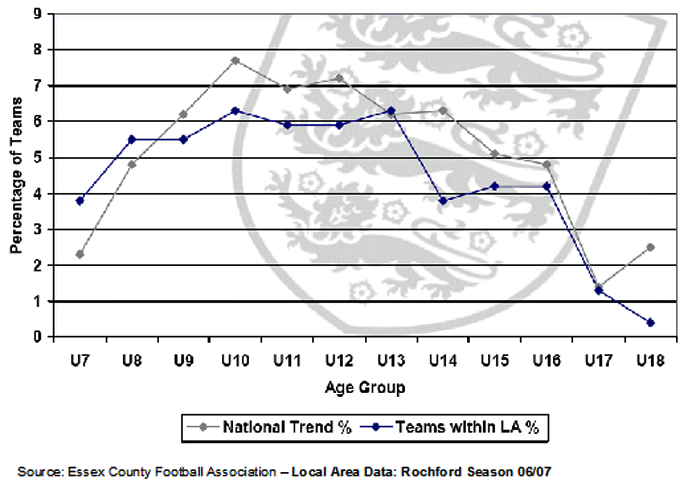 1.21 Research conducted by the Department for Culture, Media and Sport and Sport England published in 20066 suggests that the situation for playing fields and playing pitches in England continues to improve.

1.22 Nationally, the number of submitted planning applications on playing fields increased by almost a quarter between 2000/2001 and 2005/2006 to over 1300 (see Appendix A). Ninety-seven percent of the applications which reached full conclusion either enhanced or had no negative impact on the quality of the sports provision, according to Sport England.

1.23 In 2004/2005, 26 new playing pitches were created in England. These were not built on existing sites, thus increasing the provision for sporting activities.

1.24 Sport England’s ‘Active People Survey’, which was completed in 2006, focuses on the level of participation in sport and recreational activities throughout England. It has divided England into nine different regions. Generally the amount of active participation in the east of England by the adult population is around or above the national average, for example:

1.25 Sport England has summarised the significant statistics and trends for a variety of national sports, and identified the implications for future demand for playing pitches. The four most played sports in the District have been included in the table below.

1.26 Previously there have been inaccurate and sporadic attempts to quantify the provision of playing pitches for sports in England. Some initiatives have estimated that there were around 70,000 pitches, however, this cannot be confirmed, and without a comprehensive monitoring system of playing pitches in light of threats from development, it is unknown how many of these valuable open spaces may have been lost.

1.27 In recent years there has been a national effort to raise awareness of the importance of playing pitches in enhancing community cohesion, social inclusion and general well-being. The Playing Fields Monitoring Group was launched in April 2000 the Department for Culture, Media and Sport (DCMS) to deal with issues affecting pitches. Representatives from stakeholder groups such as the Office of the Deputy Prime Minister and the National Playing Fields Association (now Fields in Trust) monitor planning applications and examine the wider concerns regarding playing pitches.

1.28 The original Playing Pitch Strategy, which was developed in 1991 by the National Playing Fields Association (now Fields in Trust), the Sports Council (now Sport England) and the Central Council for Physical Recreation (CCPR), is replaced by the current Playing Pitch Methodology produced by Sport England.

1.29 The Active Places database, which is an initiative of Sport England, was launched in 2004 and provides a current estimate of various sporting facilities in England. Data accuracy is reliant on the quantity and quality of information gathered and submitted by several organisations such as The Leisure Database Company, and as a result it is an ongoing process.

1.30 The Register of English Football Facilities (REFF) is a database commissioned by the Football Foundation in 2001 and backed by several partners including the Football Association and Sport England. The database is being frequently updated. Using this source, preliminary research revealed that there are:

1.32 Sport England (whose guidance is reviewed in Chapter 2) state that it is their:

‘policy to object to any planning application, which will result in the loss of a playing field, unless it meets one of five exceptions as defined in Planning Policy Statement – A Sporting Future for the Playing Fields of England’7.

1.34 According to the Fields In Trust’s database of protected fields, the following playing fields in Rochford District have been awarded protection status:

1.35 Locally, the Essex Playing Fields Association (EPFA) is responsible for supporting and advising Parish/Town Councils, community and other groups responsible for maintaining playing fields. The EPFA tries to work closely with national organisations such as Sport England and the Foundation for Sports & Arts.

1.36 The Council owned playing pitches in Rochford District are maintained by an external contractor.

1.37 Active Rochford was established in 2007 under the guidance of Sport Essex to bring together voluntary, public and private stakeholders involved in the development of sport within the District, with the broad objectives of ensuring a more coordinated approach, and encouraging greater participation and access to sport within the local community. Other organisations include the Rochford Sports Council, which is a voluntary body providing advice and support for local sports clubs.

1.38 The key objectives of this playing pitch strategy are to: