8.1 Responsibility for the repair and maintenance of the church lies with the parochial church council. This is a heavy responsibility for a small parish such as Paglesham. Whilst acknowledging the difficulties involved, every effort should be made to prevent the condition of the building deteriorating further. Rigorous basic maintenance regimes, including regular clearing of ivy and scrub away from the building, would help and need not be costly. Grants can be secured to ensure an effective and manageable programme of repairs can be put in place. The west window is a particular priority, and the boundary wall should not be forgotten. English Heritage have recently launched their 'Inspired' campaign to tackle the problem of caring for places of worship. Further advice and information is available on their website at www.english-heritage.org.uk.

8.2 Paglesham churchyard is also the responsibility of the PCC. The churchyard should be managed in such a way as to maintain a naturalistic and tranquil character appropriate to its rural setting, with low level intervention. The historic character of the graveyard should be respected, including the arrangement of gravestones, planting, and the boundary treatment. However, the scrub has been left to grow up recently, and a considerable amount of clearance is required particularly along the boundary wall and around graves, as well as grass cutting. If left unchecked the historic character of the churchyard will be eroded, and self-seeded scrub and trees will take hold. 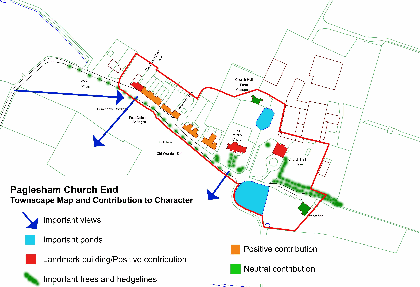 Reproduced by permission of Ordnance Survey® on behalf of the Controller of Her Majesty's Stationery Office. ©Crown Copyright. Licence number LA100019602

8.3 Unsympathetic alterations can threaten the special character of conservation areas. Unauthorised alterations to listed buildings can be dealt with via enforcement procedures, and many of the buildings that make a positive contribution to the special character of Church End are already listed. It is also possible to increase planning controls over certain alterations carried out as permitted development to unlisted properties, including window replacement and hard landscaping of driveways, by introducing Article 4(2) Directions. In such a small community this would be a rather heavy-handed approach. However owners should be encouraged to reinstate traditional features and avoid further unsympathetic alterations wherever possible in order to preserve and enhance the attractive appearance and special character of their environment.

8.4 The public realm at Church End is generally good and appropriate to the informal, small-scale and rural character of the area. Whilst some conservation areas suffer from excessive street clutter, road signs and markings, this is not the case at Church End. The road edge is loosely defined, with no kerb, fuzzy verges and few markings. The street scene is enhanced by tree planting which contributes to the rural quality of the area. The low key, minimal intervention approach to the management of the public realm should be maintained by the County Council's Highways division. However some improvements could be made. The car parking area of the Punch Bowl has already been mentioned and the landowner should be encouraged to improve this. Street lighting is small scale and unobtrusive, but is of a modern design that could be improved upon if the opportunity arises. Some maintenance is required - one of the lamp standards is leaning at a jaunty angle. The group of street furniture outside the Old Post Office including the telephone kiosk and the post box occupies a prominent position in the street scene and is rather untidy. The Highways division could contribute to enhancement and landscaping of this area, and BT should carry out some maintenance of the listed telephone kiosk (Fig. 38). There is a scruffy noticeboard which the parish council should replace with something sympathetically designed for the rural context. The undergrounding of overhead wires would also enhance the street scene. 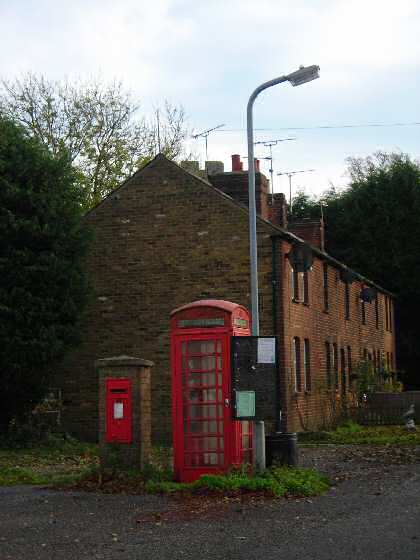