Rochford District Council is committed to preparing Area Action Plans (AAP) for its three main centres of Rayleigh, Rochford and Hockley. The AAPs will form part of the statutory development plan for Rochford District. This document focuses on guiding the development of Hockley centre, as well as adjoining light industrial areas and the rail station, during the current plan period to 2026.

The Rochford Core Strategy identifies Hockley as an area for change and improvement, and it is envisaged that the settlement will benefit from a higher quality environment and public spaces, with improved landscaping, an enhanced retail offer and better connectivity. It is also planned that Hockley will experience housing growth, in part through a mixed-use redevelopment of its existing light industrial areas.

Balancing the need to protect the Hockley’s village character against the need to attract new investment is critical to its economic success. It is also central to this AAP.

The AAP will, if adopted, form a part of Rochford District’s Development Plan. Alongside the adopted Rochford Core Strategy and other key planning documents, the AAP will eventually replace the existing Replacement Local Plan (2006).

The next step is for this submission version of the AAP to be published and placed on deposit for a six-week period, during which interested parties will be invited to make representations. It will then be submitted, alongside any representations received and other supporting documents, to the Secretary of State who will make arrangements for an Examination in Public by an Independent Planning Inspector. The AAP will be measured against the established tests of soundness and the Inspectorate will then issue a report with findings and decision. If it is found sound – with or without modifications – the AAP will then be adopted.

Once adopted, the AAP will be used as a framework for the development of Hockley and in the determination of planning applications. It will be subject to the normal processes of monitoring and review.

Any representations on this pre-submission version of the Hockley AAP should be sent to Rochford District Council.

In recent years a number of community engagement and consultation exercises have been undertaken in relation to Hockley. These have been in support of the production of the Hockley Parish Plan, the Hockley AAP and the Rochford Core Strategy. The AAP has been informed through its various stages by the responses received to these exercises, which were:

Most recently a further stage of consultation was held on the planning policy framework for Hockley that had emerged following the Options Report. This was a public exhibition, which was held between 14 and 24 August 2012. A range of responses was received as a result of the consultation and the key messages were that:

Rochford District Council is working closely with its partners to ensure that the strategic and cross-boundary implications of the Hockley AAP are being fully explored and that any discussions will feed into its positive preparation. The Localism Act 2011 sets out a ‘duty to co-operate’, which requires such a process.

The core area for the Hockley AAP covers the rail station and its surrounds, the Hockley Trading Centre and Foundry Business Park, Spa Road, and the central sections of Main Road and Southend Road. This area is broadly considered to be Hockley’s centre.

The retail offer in the AAP area is relatively limited in comparison with other nearby towns, with few high-street multiples but a reasonable selection of independent comparison shops. A collection of community uses, comprising a library, Health Surgery, a number of places of worship and the Parish Council can currently be found at the southern end of the area.

Between the central retail area and rail station there is a relatively recent, mixed use housing and office development. Notwithstanding the location of the offices next to the established Foundry Business Park, demand for office space in the area is weak. The Hockley Trading Centre has seen some approvals for the conversion of employment units to leisure uses in recent years. These are currently located amongst the remaining light industrial uses. These have proved popular with local people and are a valued local amenity.

Established suburban neighbourhoods encircle the Hockley AAP area. The relationship between the central area and these successful suburbs is an important consideration for the AAP. 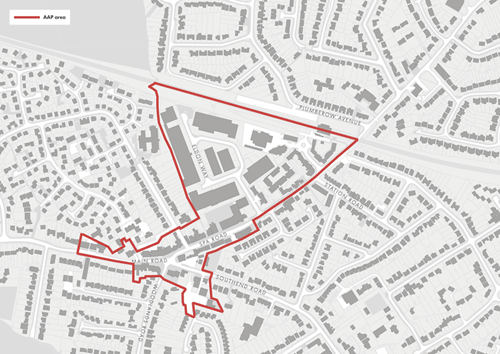 Reproduced from the Ordnance Survey mapping with the permission of the Controller of Her Majesty’s Stationery Office Crown Copyright. Unauthorised reproduction infringes Crown copyright and may lead to prosecution or civil proceedings. This copy is believed to be correct. Nevertheless Rochford District Council can accept no responsibility for any errors or omissions, changes in the details given or for any expense or loss thereby caused.