The emerging Core Strategy highlights that the approach taken towards employment is “focussed on developing existing spatial patterns of employment, providing higher levels of employment and seeking to realise the economic potential of London Southend Airport.”

In the past, employment allocations for the District were quantified in terms of the amount of land to be set aside for employment purposes. The East of England Plan instead specifies the number of jobs each sub-region must provide. Rochford District is within the Thames Gateway sub-region and must provide 3000 new jobs during the plan period. It is, however, still necessary to allocate sufficient land in which such jobs can be accommodated.

This site adequately serves its current purpose in providing employment in port-related activities. Due to its poor strategic location and poor site access, infrastructure improvements should be made to improve its accessibility and to retain existing employment uses

This is a fit-for-purpose industrial estate which is in a good condition. It is proposed that the site remains allocated for employment uses.

This is a fit-for-purpose industrial estate which is in a good condition. It is proposed that the site remains allocated for employment uses. 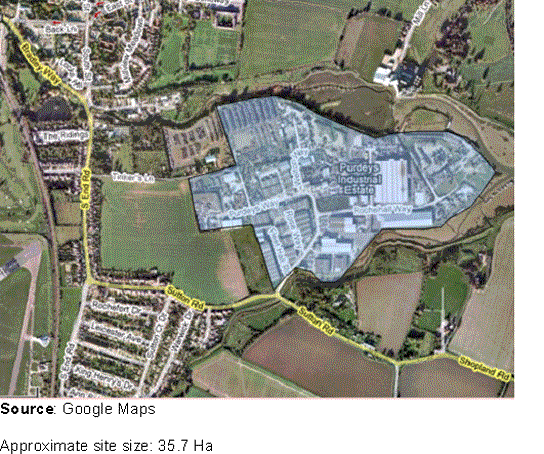 The quality of existing building stock at this site is very poor and so should be improved. It is centrally located, which makes it a strategically good site for additional office use to meet future requirements. It is proposed that the site remains allocated for employment uses. 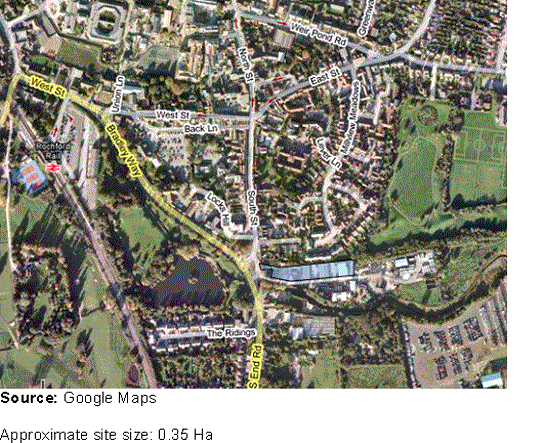 This is a new site in very good condition with good access to the highway network. It is proposed that the site remains allocated for employment uses.

This is a fit-for-purpose industrial estate with good access to amenities, which is in a good condition. It is proposed that the site remains allocated for employment uses. 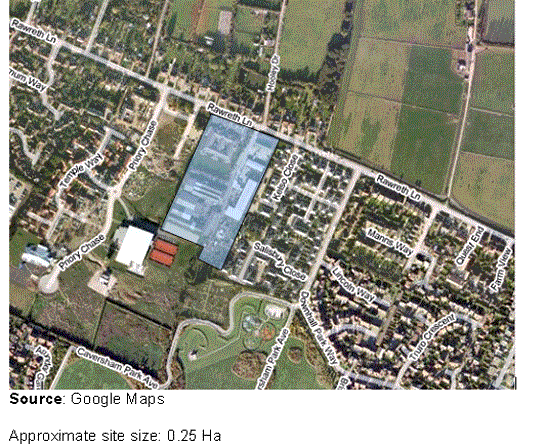 Although the existing building stock quality is poor there is potential for redevelopment which should incorporate high quality office accommodation. It is proposed that the site remains allocated for employment uses. 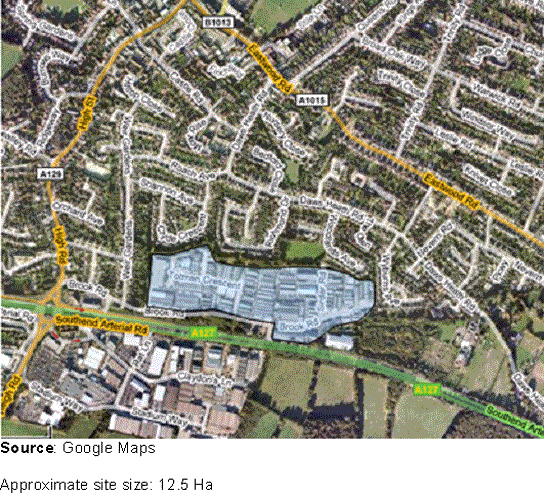 This site is in an adequate condition but could be improved through enhancement, intensification and expansion. Aviation Way will be addressed as an employment site through the London and Southend Join Area Action Plan. 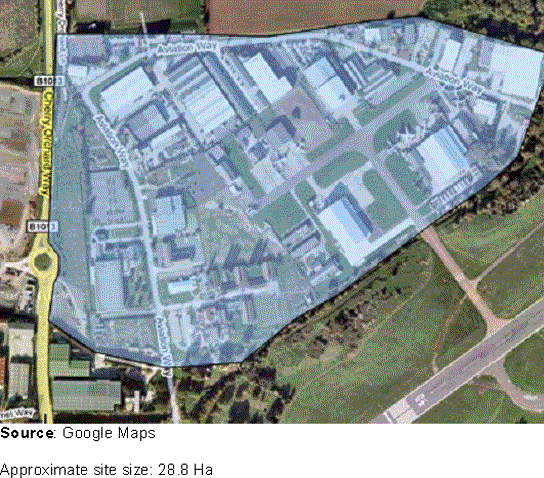 The site has good road access at a site level and it is adequately serviced for its purpose, however, it has poor strategic access and the quality of existing building stock is very poor. As such, the Council will reallocate this site for other uses and the existing employment land will be relocated elsewhere within the District. Further details on this site can be found in the Housing Chapter.

This site is a strategically well placed employment location. However, in recent years there has been increasing pressure for non-industrial uses on the estate to be allowed. The site is well placed in proximity to the centre of Hockley and would be more appropriately utilised as a mixed use development incorporating office space to complement surrounding employment uses, as well as a range of community and leisure uses more appropriate to its town centre location. The existing employment land will be relocated in a more appropriate location elsewhere within the District. Further details on this site can be found in the Housing Chapter.

This site is currently poor quality and is not in use. Whilst it could be safeguarded for light industrial use, it has been identified within the Urban Capacity Study as a suitable site for housing allocation, and as such, the existing employment land should be reallocated. Issues around flood risk must be resolved prior to any development of this site. Further details on this site can be found in the Housing Chapter.

Existing building stock is of poor quality and the site has particular environmental issues. The site has been identified in the Urban Capacity Study as suitable for housing use, and as such, the site will be reallocated for housing. The existing employment land will be relocated elsewhere within the District. Further details on this site can be found in the Housing Chapter.

18.1 ha of industrial land will be allocated to compensate for de-allocations. New employment allocations will be in better strategic locations to meet the needs of businesses, be in accessible locations to the local population, and at the same time minimise any negative impact on residential amenity. The majority of future employment will be directed to the west of the District and in proximity to London Southend Airport. Some industrial land will be allocated in proximity to Great Wakering to provide local employment and mitigate the de-allocation of Star Lane Industrial Estate.

A further 2.2 ha for office development will be allocated in order to meet projected demand. This office space will be predominantly directed to Rayleigh and Hockley, with exact locations and quantum to be determined through Area Action Plans for the respective centres. A sequential approach will be adopted, prioritising Rayleigh and Hockley centres with any demand that can not be accommodated in these centres being incorporated into a new employment allocation to the west of Rayleigh.

The Council will allocate land to the south of London Road, Rayleigh to accommodate a new employment park capable of accommodating businesses displaced by the redevelopment of Rawreth Industrial Estate as well as additional office space. It will have the following characteristics: 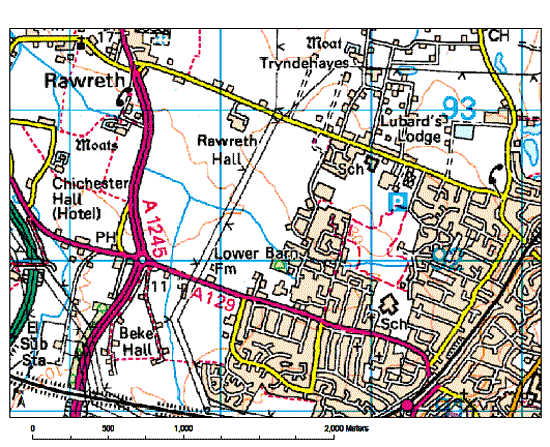 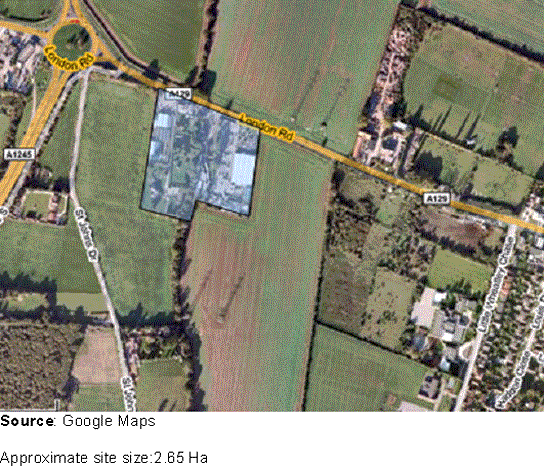 Option E14 is as E13 but extends to the east, still directly south of London Road. 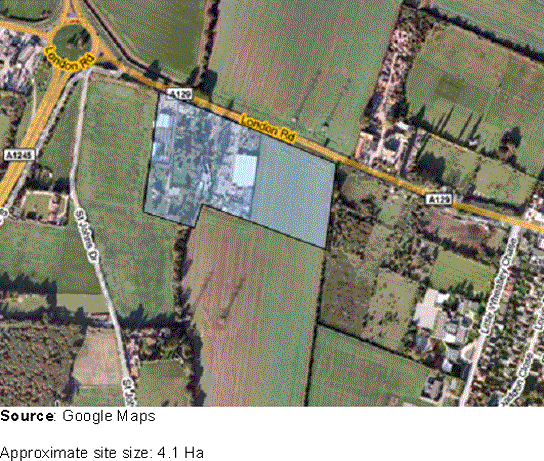 Option E15 as E13 but extends further south and is detached from any settlement. 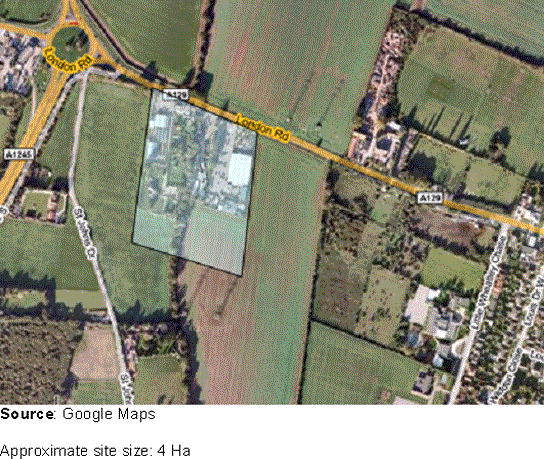 Option E16 is as E13 but extends further to the west, adjacent to St. Johns Drive. 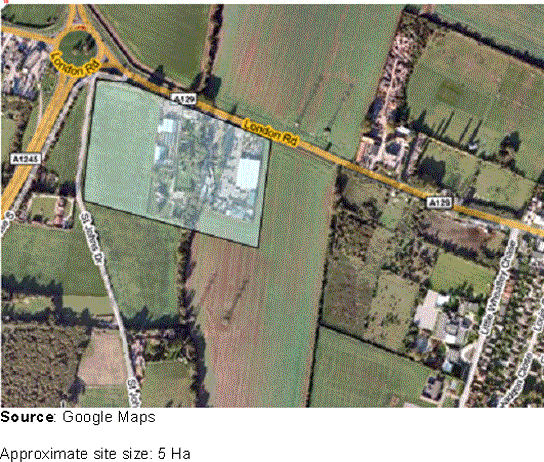 Option E17 is adjacent to the junction of Chelmsford Road and London Road, and is directly north of London Road. The site is detached from any residential settlement. 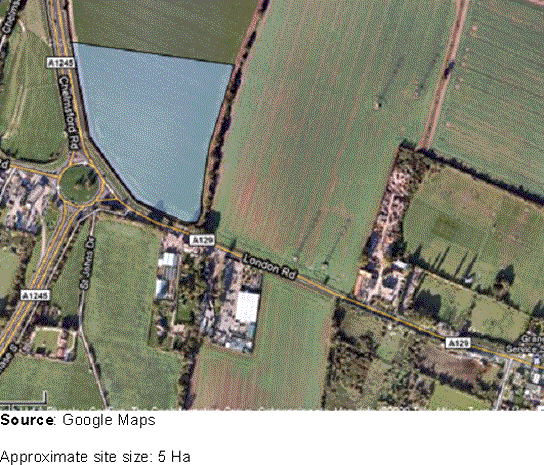 Michelins Farm is located east of the A1245 and north of the A127. The site is detached from other residential settlements, making it less suitable for residential use, but the site Is well located for employment uses. This is due to its location in close proximity to main routes, namely the A1245 and the A130 and A127, which are also suitable for Heavy Goods Vehicles. 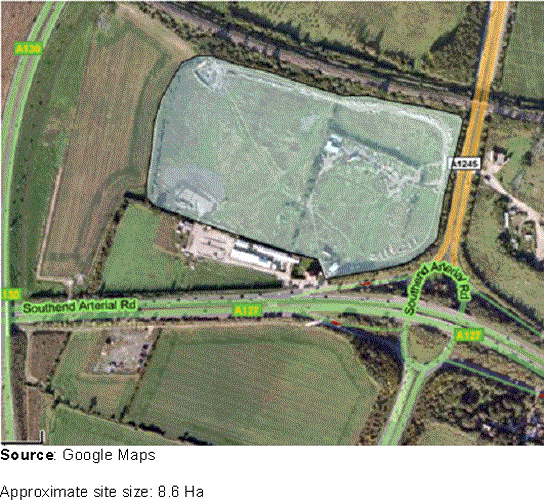 The Core Strategy notes the importance of London Southend Airport and environs as a driver for the sub-regional economy, identify the area as a strategic location for additional employment land.

The Core Strategy states that the Council will work with the private sector to secure the delivery of an Eco-Enterprise Centre within an employment allocation. As such, the area to the north of London Southend Airport is a potential location. The Centre will provide invaluable support for early stage businesses and will be built to high environmental standards through meeting the ‘Excellent’ BREEAM rating for sustainable, carbon-neutral construction, reducing energy costs and promoting sustainable construction. The development of an Eco-Enterprise centre will need to have regard to a feasibility study.

The emerging Core Strategy supports the statement made in the East of England Plan that London Southend Airport has an important role to play in the economic development of the area. London Southend Airport and environs straddles the boundary of Rochford District and Southend Borough. As such Rochford District and Southend Borough Councils are producing a Joint Area Action Plan to identify how best to realise the airports economic potential.

Currently the airports environs are used for employment uses, many of which are aviation focussed. The approach to London Southend Airport and environs is set out in the emerging Core Strategy.

The extent of the area to be addressed by the London Southend Airport and Environs Joint Area Action Plan is illustrated in Figure 3.1 below. 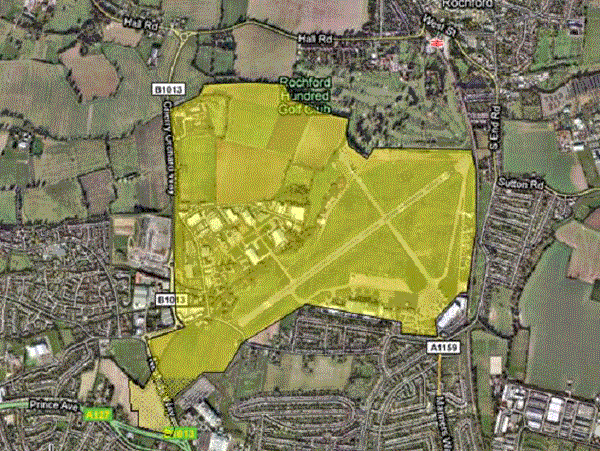 The Council will allocate land to the south of Great Wakering for a new strategically located employment park. This new employment facility will be capable of accommodating businesses displaced from Star Lane Industrial Estate. 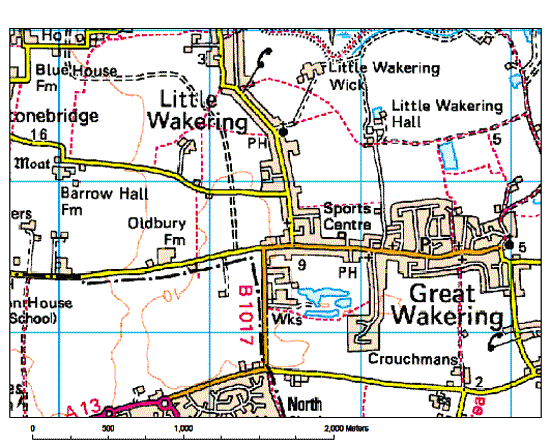 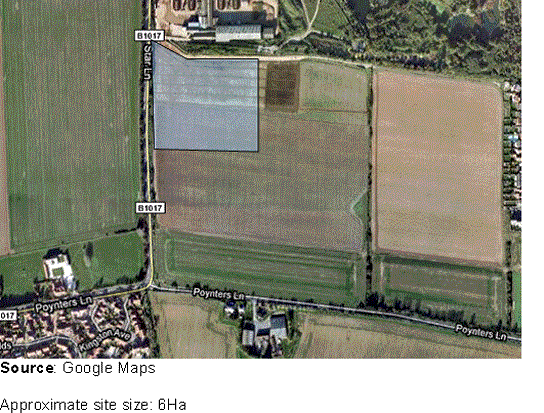 Option E20 is as E19 although extends further south. 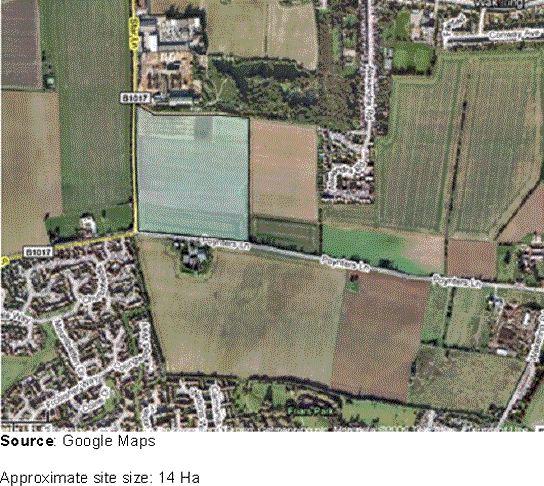 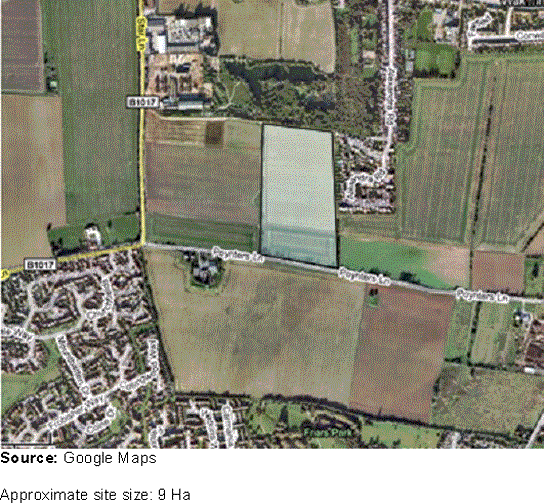 Option E22 is as E19 although concentrated to the north of the site. This is adjacent to a smaller proportion of residential development to the east of the site and would also result in less impact on Poynters Lane. 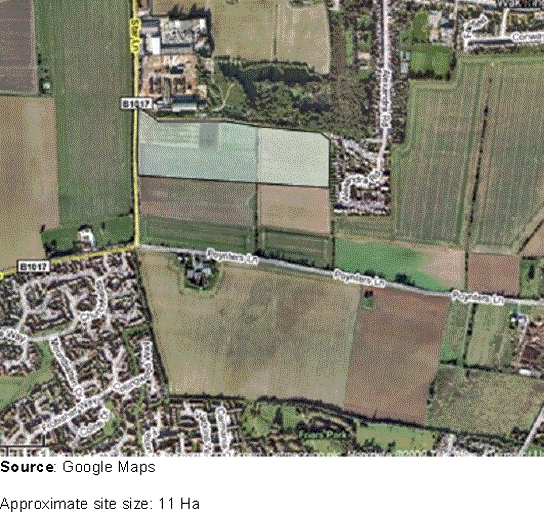 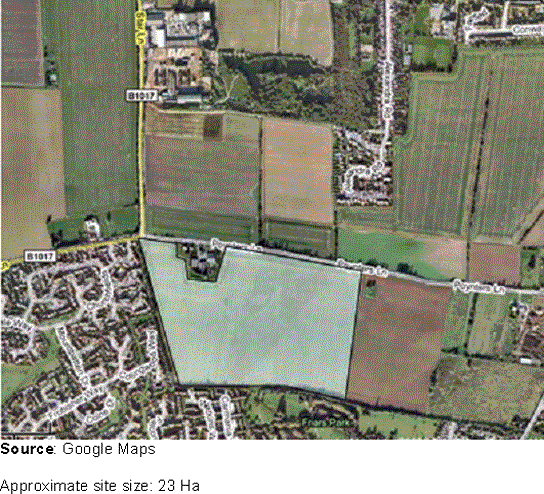 Option E24 is as E23 with the exception being that the site does not extend as far south. The relationship between an employment site at this location and Great Wakering would be weak. The site is detached from the main settlement of Great Wakering and is instead located at the boundary of residential settlement within the neighbouring Borough, Southend-on-Sea, and as such is more likely to be seen as a part of that community, than the community of Great Wakering.

Such an allocation projects into the open countryside and would lead to weak Green Belt boundaries, with Green Belt immediately to the north, east and south. 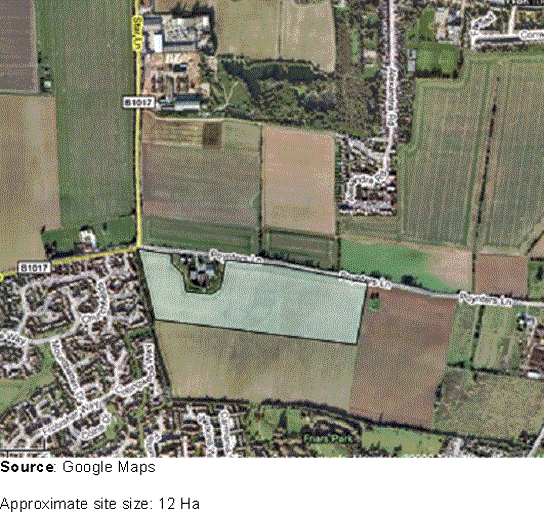